I’m not sure why I’m even sharing this recipe.

I think it’s because I’ve promised myself to share the ups and downs of learning to cook – and that means that sometimes (but not as often as in the past), recipes are just not going to turn out that great.

Not that this was horrible, but it certainly was not a favorite for anyone in the house.

I was excited, once again, to use my crockpot for an easy recipe – this time branching out from my typical American or Mexican fare.  I should’ve known my crockpot successes would have to come to an end sometime.

Trim excess skin and fat from chicken.  In skillet cook chicken, skin side down, in hot olive oil for 8 minutes, or until browned (do not turn thighs).

In slow cooker, add carrots and onion.  In small bowl, whisk together 1/2 c coconut milk and curry paste.; pour over vegetables.  Place chicken, skin side up, on top of carrots and onions.  Cover.

Remove chicken, skim off excess fat, and then stir in remaining 1/2 c coconut milk.  Top with cilantro and serve.

I knew, knew, that I would regret using bone-in chicken thighs.  From my Tortilla Soup recipe last week, I knew that they would make the recipe greasy.  I stuck with them because I was hoping the browning beforehand might leach some of that grease out.  Wrong.

(I think BH&G used the thighs because it’s supposed to be a meal on a budget – but seriously, I have learned my lesson and will be sticking with boneless skinless breast from now on.)

Anyways, it was really easy to put together.

My math skills (or lack thereof) were put to the test when I had to chop the veggies.  Let’s just say my 2-inch carrots did not quite live up to 2 inches.  But my onions were pretty. 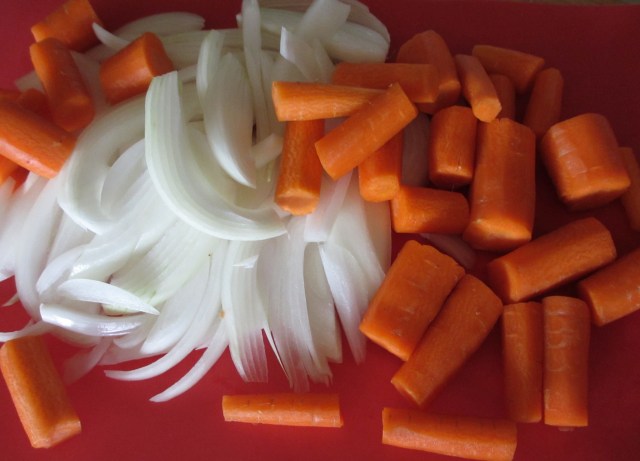 Besides the chopping and the browning, it was another dump and go recipe.

Things I wish I’d known before making this:

1.  Our curry paste happens to be extremely hot.  Hubs, apparently, only uses about 1/2 of what is asked in any recipe.  Oops.

2.  Even if it doesn’t say, always, always season your meat.  Otherwise it tastes bland – even after soaking in spicy curry all day.

So basically, it was an extremely hot curry surrounding some very bland and greasy chicken.  Not the most appetizing.

It’s not that I don’t think this recipe is salvageable, it’s just that we have better curry recipes that are just as easy.  But, I’m sure if someone else was motivated enough they could make this much better.  (I even tried to challenge Hubs again, but he said it wasn’t really worth it.)

One really good thing did come out of it though… 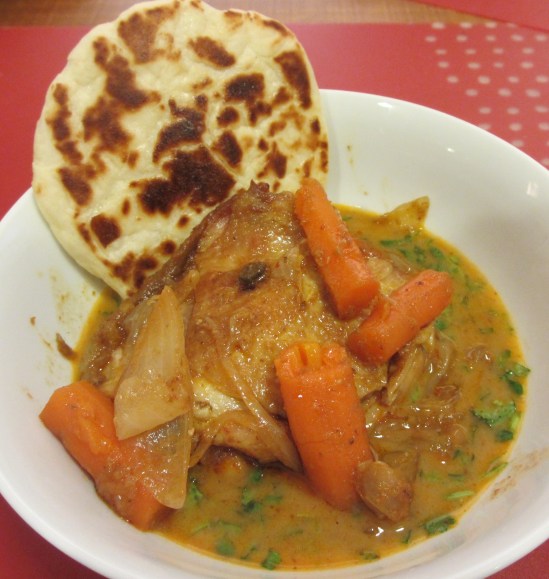 And I’ll be posting about it later this week.