Several weeks ago, there was a revelation on Facebook (well, at least with many of my *friends*).  Suddenly everyone I knew was liking the Crockpot Girls.

I’d never heard of them before, but they did remind me of my humble beginnings here on the blog – where pretty much all my recipes were from a crockpot, and I complained about Hubs a lot.  (It was a simpler time.)

So I decided to check them out and try one of their recipes, for nostalgic crockpot reasons.

It didn’t quite work out the way I expected.

salt and pepper, to taste

Lightly grease the stoneware with nonstick cooking spray.  Place the chicken in the stoneware.  In a bowl, combine the enchilada sauce, tomato paste, water, and spices.  Spread the mixture over the chicken.  Add onions and peppers.  Cover; cook on low for 7 – 8 hours.

(So I followed this recipe.  And nowhere did it even resemble a casserole when I was done!  It was more like a soup.  I decided I need to figure out a way to fix this.  My additions and changes are below.)

3-4 c your favorite Spanish rice (We had some of Hubs frozen, thank goodness, so I used it – and no, he won’t let me share the recipe.)

Shred chicken and leave in sauce.  In 9 x 12 baking dish, spread rice evenly along bottom.  Add the chicken mixture as a second layer.  Top with cheese.  Place in 350 degree oven for 30-35 minutes, or until cheese is browning and slightly bubbly.

Serve with sour cream, salsa, and chips (either crushed on top or on the side).

As you could read in the recipe, the original directions from the Crockpot Girls did not pan out.  I have to admit, the chicken was really tasty when I tried it, but I was going for a casserole dish, not a soup.

(I’m not ruling the Crockpot Girls out, yet, though.  I think I’ll have to try a different recipe another time before I judge too harshly.)

But I was SO proud of myself for figuring out what to do next.  (Even though I did give up that day, I admit.  I ended up putting the dish in the fridge, and we had french toast instead.  But I did regroup the next day with a plan.)

I was very lucky that we had the rice in the freezer – that made Day 2 of the Great Casserole Adventure pretty easy.  And really, between the two days, I maybe spent about 20 minutes in prep time.  That’s not bad at all. 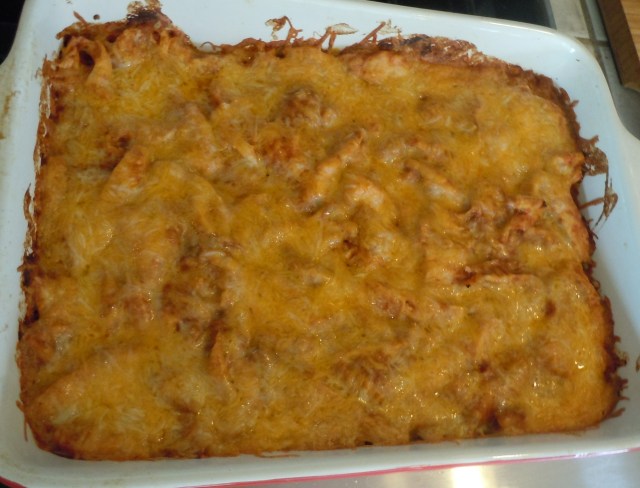 And it was really good, too.  It was perfect for the blustery fall day we were having.

The chicken and rice were really moist with its southwestern flavor – and paired with the spicy salsa verde, fresh sour cream, and crunchy blue tortilla chips – it was a party for your senses. 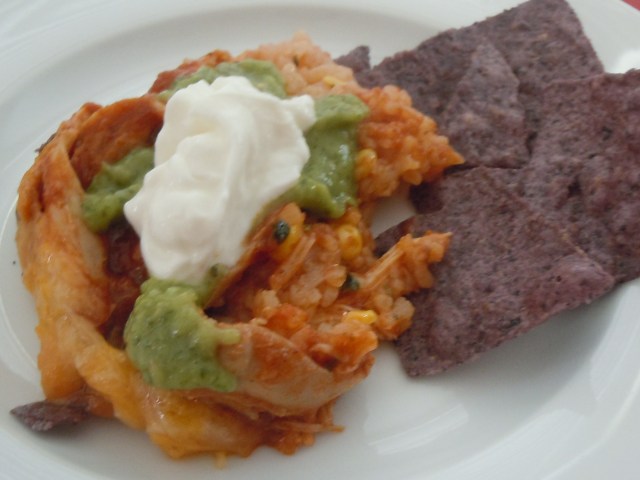 I took a probable disaster and made it work!

Tim Gunn would be so proud.