No, I haven’t tried my original pickles yet.

Still waiting – well, actually counting down.  2 days and it’s all about the pickles.

But I realized something, as I thought about the cucumber-goodness waiting for me… there was no dill involved.  No dill at all.  That could be a serious problem, as I love dill pickles.  Just give ’em to me straight from the jar, and I’m a happy lady.

My husband must’ve realized dill’s glaring absence and returned home with not one, but two new glass pots.  I casually asked him why he got two jars, not one.  And he replied that he was going to be making his own pickles, too.

(Now, I’m going to digress for a brief moment to explain some things.  As I have been learning to cook, I’ve tended to pick things that Hubs has never made before.  Things that are a little different from our usual repertoire of edible items.  I’ve noticed that {especially if my recipe turns out good} Hubs makes his own version soon after.  I don’t think he’s trying to steal my thunder, but he’s testing himself to make sure he can make the food just as good as I can.  Or he’s just competitive that way.   Anyways, I am proud to say that more than once or twice, my recipe won.  Hands down.  So, I’m thinking this is what’s going on about the pickles.)

So it’s on!  We’re having an old-fashioned dill pickle throwdown.

We both decided to just throw stuff in – after looking at several different recipe ideas.

And we both are using cucumbers fresh from our garden…

Dill Pickles, from me, but I still don’t know if it’s good…

1/4 of a large bunch of fresh dill

water to fill rest of jar

The Home Team – I have used spears instead of slices, because I want that big crunch when you bite into it.

The Challenger – Hubs used slices.  No idea his reasoning.

The Home Team – I went pretty typical.  No crazy additions.

The Challenger – Not a clue what he used, I was too busy with my stuff.

We both used the same method: dump in, shake, and put in fridge.  We will both leave our pickles in the fridge for seven days, at which time a panel of objective judges will taste and rate our pickles.  (And when I say panel, I’m talking about maybe our neighbors or some people we pull off the street.  😉 ) 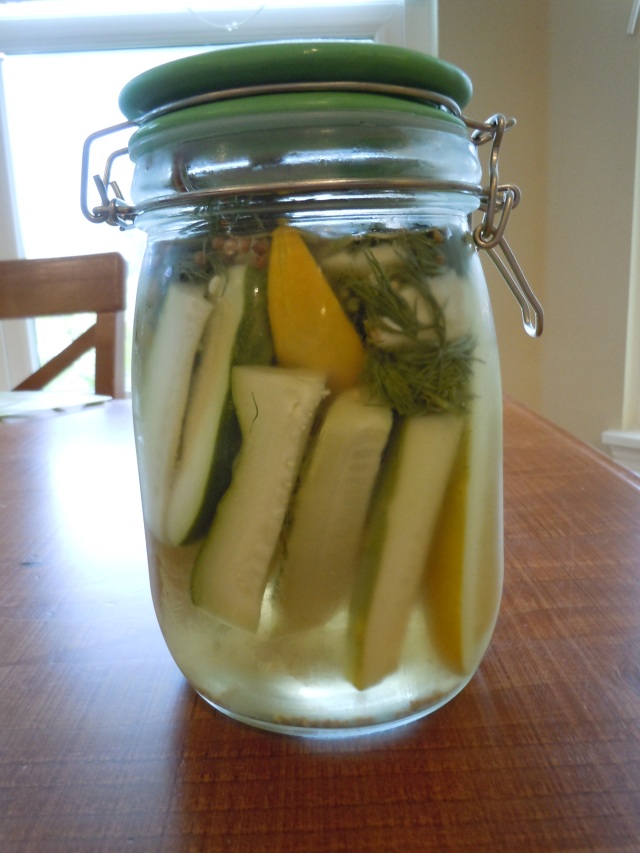 I think I’ll also add my original pickles to the tasting.

May the best pickle (mine) win!