I can usually resist donuts.  I am just strong-willed like that.

But, honestly, apple fritters are my donut downfall.

(Well, excluding those dinky donuts at Pike Place or coconut donut-holes, but they don’t count because they’re miniature.  Right?)

When I saw this amazing recipe on Flour Me with Love, I could not resist.  (I tried really, really hard.  For about 2 days.  It’s that amazing willpower I mentioned earlier.)

Anyways, I was feeling pretty darn confident about my baking lately, so of course, things had to go wrong.  Not horribly wrong, but just wrong enough to give my ego a little beating…

Apple Fritter Bread, adapted from Flour Me with Love

In skillet, combine and cook all ingredients until mixture is thickened.  Set aside to cool.

Heat milk in small saucepan until it bubbles.  Remove from heat, add butter, and stir until it melts.  Set aside.

Combine dry ingredients in large bowl and mix well.  Add water, egg, and milk mixture.  Mix until dough forms a ball and then continue kneading for an additional five minutes.

Bake 45 – 50 minutes or until top is golden brown.  (Edited to add: let sit for about 10 minutes) Remove from pan immediately.

3 t half and half

Mix butter, sugar, and vanilla in a bowl.  Add half and half; stir until you get a creamy consistency.  Pour glaze on bread and let set up for a couple of minutes.

First and foremost, a note to self: Do not, I repeat, do not start a baking project after 7 o’clock at night!  (Unless of course you like being awake until 11 – which, in my sad house, is very late.)

As you can see, this recipe took a long time to make – probably my own fault, as you will read.  Peeling, cutting, and dicing the apples took me almost a full hour to start.  I actually almost thought about giving up.  But I didn’t , because I thought the rest would go by much faster.  Hah!

My next little problem had to do with making the filling…I was kinda skimming the recipe (bad Courtney!), and I started adding ingredients from the dough into my filling.  I caught myself after adding one extra ingredient, but that additional 1/4 c of water meant that ‘thickening up’ took a lot longer.  A lot.

lots of apples, not thickening...

So I sort of let it continue to cook while I worked on the dough.

Mixing the dough was easy… rolling it into a rectangle, not so much.

as close as I could get to a rectangle

At this point, the filling should be thick and cooled.  Mine was neither.  But it was getting later by the minute, and I really wanted to sample this before bed…so I glopped it on top. 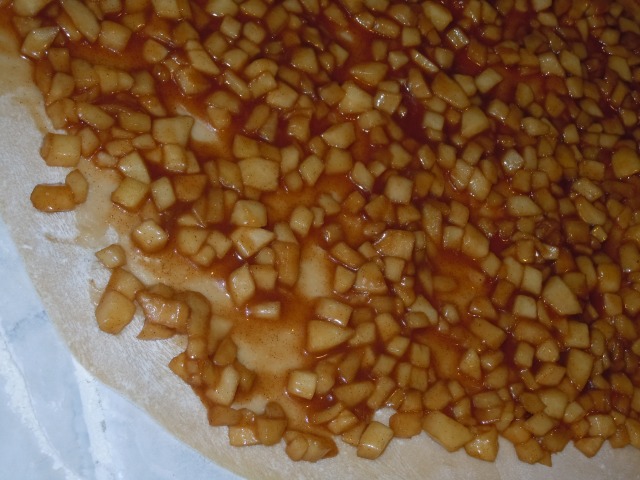 And then I sliced.  It was about the time I began picking up “squares” (let’s be honest, none of my pieces looked like real squares), that I realized I might have a big problem… See, as I attempted to stack my pieces, apples and filling would slide off the dough.  I would scoop them back on and add it to the pile.  In the process, my spatula got covered in filling, so when I tried to pick up a new slice, it would stick to the spatula.

I finally figured out that if I wiped my spatula between each scoop, it was better.   And eventually, I got everything stacked – and in the pan.

so thankful to get this part done

My counter was a disaster.  No, I didn’t take a picture of it.  No one needs to see that kind of mess, trust me.

It was almost 10, and I finally got the bread in the oven.  Phew!  Now, I’m not sure if it’s my oven or if it was my mistake in making the filling, but I had to cook the bread an additional 10 + minutes from the 50 suggested.  That was a tad frustrating, let me tell you.  Especially since it smelled SO good.

I did put those extra minutes to good use by getting my glaze all ready.  That was easy, too.

Finally, the bread was ready to come out of the oven.

It looked so good, so filled with the promise of a beautiful and tasty bread…and then I immediately removed it from the pan.

And this is what happened:

This is the point where I just about cried.

But instead, I took a deep breath, grabbed a fork, and started to enjoy the fruits of my labor.  It helped.

I never did add the glaze to the top… we kind of ended up using it as a dipping sauce instead.  Still worked great.

And the next day, after a good night’s sleep and some setting of the bread, I got to enjoy this with my coffee:

I call this recipe a draw – not a complete success, but not a failure either.  I think I’ll just chalk it up to a “learning experience” (that tasted pretty darn good.)